November 21, 2013 (THE HAGUE) - The leaders of the rebel Sudanese Revolutionary Front (SRF) on Thursday paid a courtesy visit to the International Criminal Court (ICC) and expressed willingness to collaborate with the war crimes court.

Photo shows the International Criminal Court in the Hague (AFP)

The rebel delegation led by SRF leader Malik Agar is touring European countries to explain their position over the comprehensive approach to bring peace and to establish a democratic regime in Sudan.
During their visit to the Netherlands, the SRF leadership visited the ICC headquarters where they met with an external relations officer from the Outreach unit. The delegation was briefed about the court functioning and it is different departments.
During a meeting with the ICC officials, the visiting delegation expressed its willingness to cooperate with the court saying they are ready to hand over any of their members including the leaders if they are accused of perpetrating any war crime.
The rebels further regretted the non-arrest of president Omer Al-Bashir in spite of the warrants issued against saying this not-arrest encourages him commit more atrocities and crimes as it was the case during the bloody repression of protesters last September.
The rebels said they will keep their efforts to mobilise the international community, rights groups and Sudanese people on the need to cooperate with the international court. They further stressed the need to carry out a, awareness and information campaign in Africa to explain the ICC mission.
The ICC issued two arrest warrants against Bashir in 2009 and 2010 for alleged war crimes, crimes against humanity and genocide committed in Darfur region.
Nonetheless, last June the ICC prosecutor Fatou Bensouda criticised the United Nations Security Council (UNSC) over its "inaction and paralysis" over Darfur cases.
Bensouda also criticised the UNSC for failing to intervene after neighbouring countries, most notably Chad, refused to arrest Bashir despite him taking several trips inside their borders.
The Sudanese rebels also attended a hearing at the court as it has started the trial of the Kenyan vice president William Ruto.
Ruto and the Kenyan president Uhuru Kenyatta are facing charges of crimes against humanity for their alleged role in ethnic violence in the aftermath of an election in 2007 when 1,200 people were killed.
Kenya backed by many African countries seeks to persuade the ICC’s members to accept an immediate change in the rules of the court providing that the head of states are not forced to attend trials.
The east African country also demands a longer-term amendment in the ICC’s founding treaty, the Rome Statute status banning the prosecution of heads of states.
Posted by Guihon at 1:33 AM No comments:

By Ian Timberlake (AFP) –
Kassala — Sudanese officials in the border region with Eritrea appealed on Wednesday for EU help to combat human trafficking, an issue highlighted when hundreds of Eritrean migrants died off Italy.
"We are confronted by organised groups," the governor of Kassala state, Mohammed Yousef Adam, told European Union ambassadors visiting from Khartoum.
"And we need your help on this."
Kassala is one of three states in eastern Sudan that border authoritarian Eritrea, from which many thousands of people have fled.
The United Nations refugee agency (UNHCR) says on its website that the 1,800 refugees and asylum-seekers who arrive each month in eastern Sudan "brave often violent traffickers, smugglers and kidnappers".
Rather than stay in poverty-stricken eastern Sudan, the asylum-seekers are in search of better economic opportunities in Khartoum, Egypt, Israel, or further afield in Europe.
While some are believed to pay smugglers to transport them elsewhere, others are abducted, the UNHCR has said.
More than 350 migrants, mainly from Eritrea, died in an early October shipwreck off the Italian island of Lampedusa as they tried to reach Europe.
The UNHCR says it has begun a project with local authorities and the International Organisation for Migration to address trafficking, smuggling and kidnapping in eastern Sudan.
Sudanese officials told the EU delegation that some suspects have been arrested and Kassala state has passed a law against human trafficking.
"This is really an area which we want to cooperate more with Sudan and with all neighbouring countries," EU ambassador Tomas Ulicny told the state governor.
Italy's ambassador, Armando Barucco, said "the collaboration of the Sudanese authorities to curb the trafficking" is most important.
He said police in Italy and Sudan have concluded talks on cooperation to fight human trafficking, and an agreement is expected to be signed soon.
The UNHCR actually registered just 63 human trafficking cases in the first 10 months of the year, compared with 338 in 2012.
Agency officials could not immediately be reached to explain the fall in the number of recorded cases. 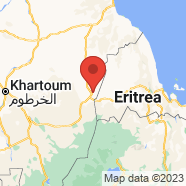 Amnesty International said in April that Eritrean refugees kidnapped in Sudan are raped, beaten, chained and sometimes killed after being forcibly transported to Egypt's Sinai Peninsula and held for ransom.
The London-based watchdog said it received "numerous reports" since 2011 that residents of the Shagarab refugee camp in Kassala state, near the Eritrean border, had been abducted.
Ulicny said his delegation, which includes five other ambassadors and a charge d'affaires, is in eastern Sudan "to demonstrate our support for peace and development" in the region, where a 2006 peace agreement ended more than a decade of low-level insurgency.
Since then, the EU has provided 57 million euros ($77 million) in assistance to develop education, health and agriculture in the region.
In addition, more than 24 million euros are expected to be spent over the next two years, Ulicny said.
Their trip concludes Thursday in Port Sudan on the Red Sea.
Posted by Guihon at 1:25 AM No comments: